Rene Alvarez with his Stearman biplane:

In Rene's own words: the model is a Stearman from Ziroli, 87" wingspan, powered by a G62 with spring starter with a fake seven cylinder engine. The weight is 30 lbs and it is covered with Solartex (Natural color) and painted with Klass-Kote. All the insignias are airbrushed and the nomenclature are dry transfers from Aeroloft, specifically made for this model, which is scale after a full scale in the California museum and it is actually flying. The covering also has simulated stitching and covered with Pink-it, the screws are miniature small screws to simulate the panels around the cockpit. The landing gear and wheels are from Sierra, propeller is from Falcon. The baggage compartment behind the cockpit has the switches for the receiver and position lights. The radio is an old JR PCM 10 converted to 2.4 system with a Spectrum receiver and A123 battery. The model has the same characteristics of the full scale plane, not a ball of fire, but with graceful maneuvering, and it has to be dived to enter certain maneuvers, just like the full scale. 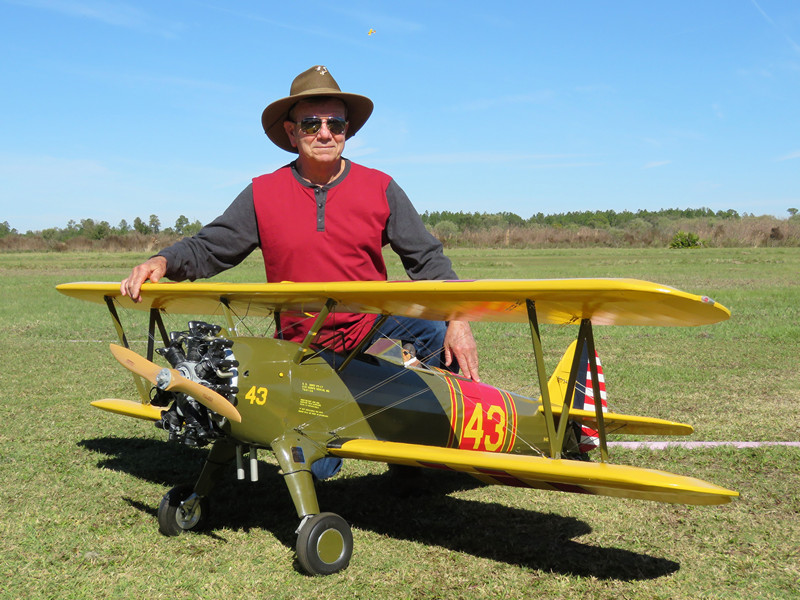 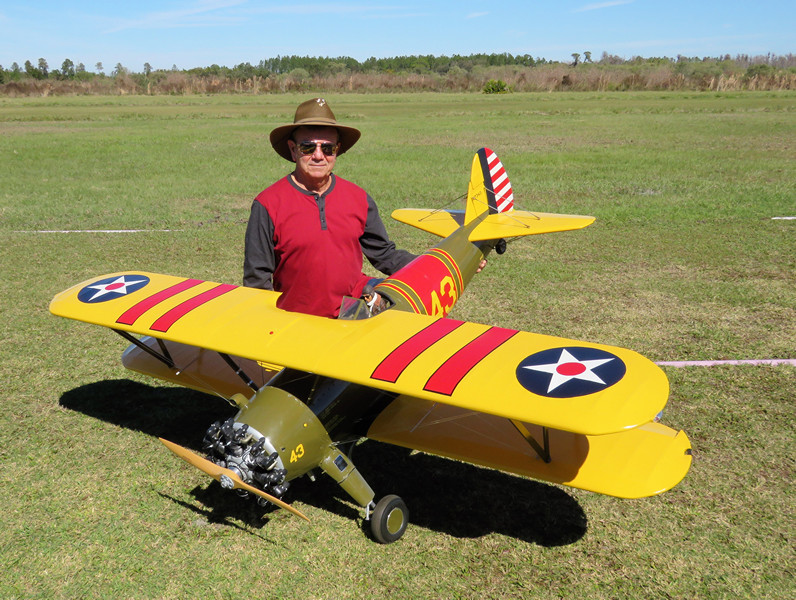 ....and his warbird, an F86 Corsair from Meister Scale, with a 100" wingspan.The F86 is a scale replica of Pappy Boyington's famous plane. It is powered by a Moki 180cc five-cylinder engine, with a three blade Solo Prop. The gear is Sierra Gear with sequencing gear and door. It is painted with Klass-Kote and has simulated rivets and screws with panel lines. All markings are airbrushed, except for the nomenclature which is dry-transfers from Aeroloft. The plane has a complete cockpit, with a actual Pappy Boyington 1/5 scale pilot replica and sliding canopy activated by radio. A JR 9303 radio with JR receivers and a SmartFly power expander with four A123 batteries (ignition, fuel pump,and two receivers) powers it. The Corsair weights 49 lbs. It won best recognition at the 12 O'Clock High in 2014. 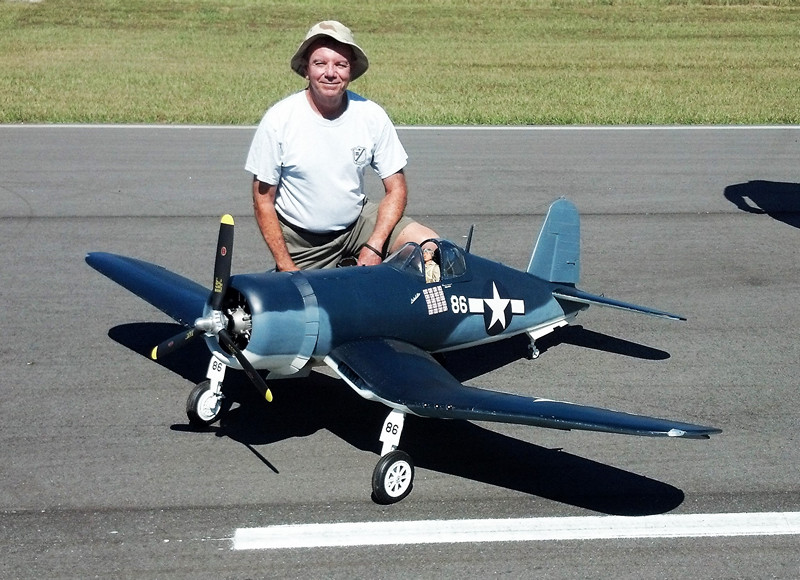 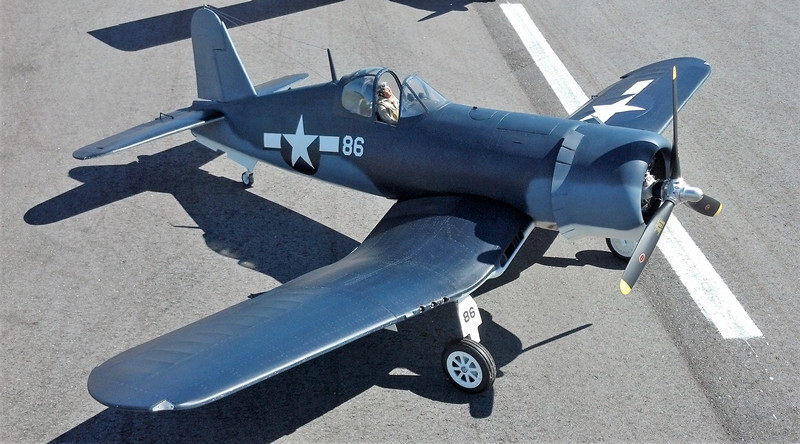 ....and another warbird, a recently finished P-36 Hawk. The model is a replica of the full scale Curtiss P36 currently at the Warbird Tails at the San Diego Museum. The model is covered with Flite-Metal to simulate the real aluminum skin. It also has the panel lines, the rivets and fastener screws. The canopy is manually operated with a full cockpit. The yellow paint and markings are painted with Klass-Kote, the Hawk insignia is dry transfer from Aeroloft. The main and tail gear is from Sierra, with functional flaps. The engine is an RCGF 50cc Twin. The model has a weight of 26lbs. with all the controls and switches hidden. 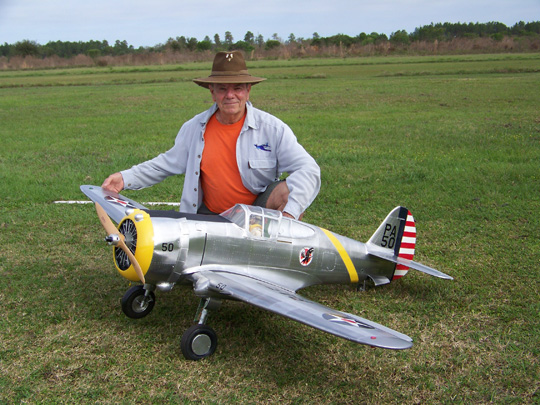 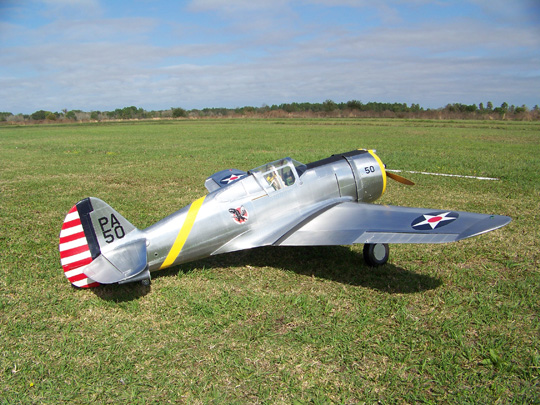 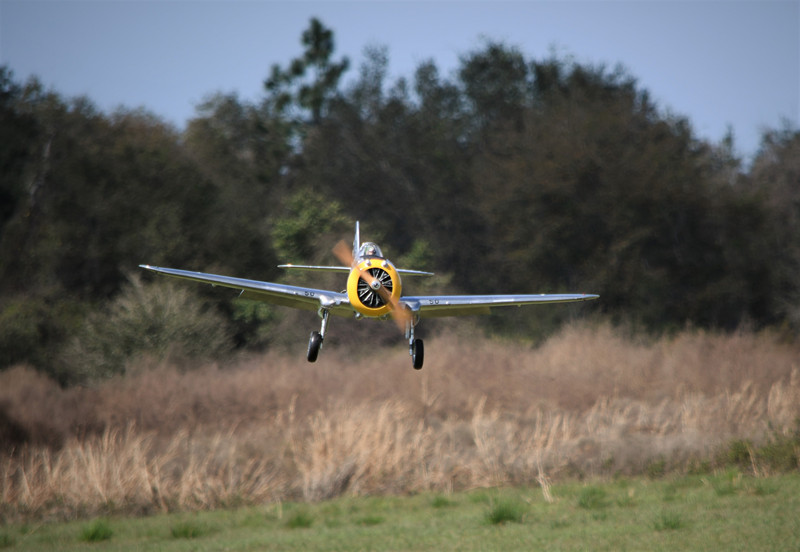 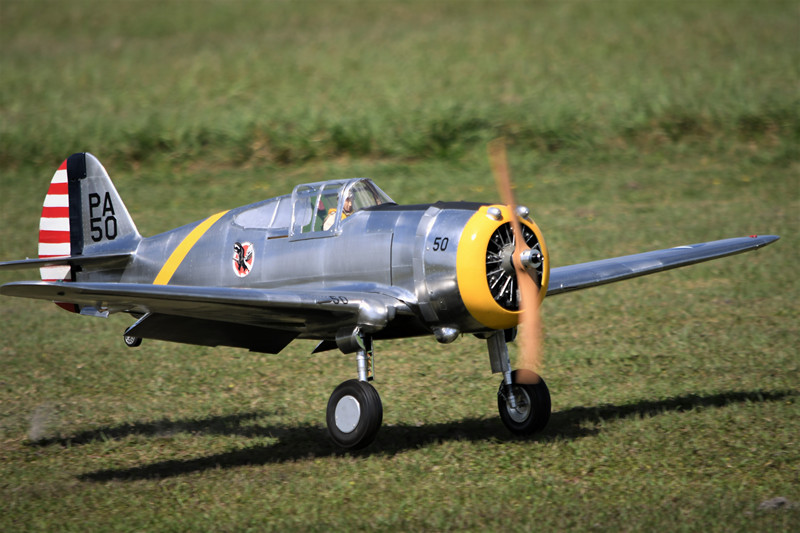